Kia Motors Corporation and UEFA have announced that the UEFA Europa League Trophy Tour campaign will return for 2020, following a triumphant first season in 2019. From February to May, the UEFA Europa League Trophy Tour Driven by Kia will visit several European cities to collect football boots for refugees. For the 2019 trophy tour, a total of 1,052 pairs of boots were donated by fans around Europe.

Throughout the UEFA Europa League Trophy Tour, fans and players of all ages will be encouraged to donate pairs of football boots as part of the #PassThemOn campaign which sends them to the Za’atari refugee camp in Jordan to be given to young Syrian refugees.

UEFA and the UEFA Foundation for Children has supported the Za’atari refugee camp in Jordan for many years, providing football pitches and equipment to enable the children to play the game they love.

Richard Tongue, Sales Manager at Grenson Kia said, “We are encouraging those in Cheshire to come and donate their used or unwanted football boots to support this important cause. Please come down and donate what you can.”

The UEFA Europa League Trophy Tour Driven by Kia will stop in seven European cities: Frankfurt, Barcelona, Rome, Geneva*, Manchester, Amsterdam, and Warsaw. The tour will give football fans across the continent the opportunity to meet football legends at city-centre pop-up locations, local amateur clubs and schools. Fans will also get the chance to see the iconic UEFA Europa League trophy as the competition's 2019/20 knockout stage unfolds.

#PassThemOn boot donations can be made at any stage of the UEFA Europa League Trophy Tour, as well as at selected Kia dealerships in each participating country.

“We are extremely excited to bring back the UEFA Europa League Trophy Tour Driven by Kia for a second year,” said Artur Martins, Global Brand & Marketing Head at Kia Motors Corporation. “The huge success of the first tour meant football fans of all ages had the chance to donate their old football boots to a very deserving cause, and see the trophy up close. This year, we hope to receive even more donations and help young refugees take part in this wonderful game.”

English football star Michael Owen has joined the 2020 #PassThemOn campaign as global ambassador for the UEFA Europa League Trophy Tour 2020 Driven by Kia. He will join the UEFA Foundation for Children and Kia in the Za'atari refugee camp in Jordan this July to hand over the donated boots.

“The trophy tour is a fantastic way to bring together football fans, as well as supporting an incredible cause,” said Michael Owen, Global Ambassador of the UEFA Europa League Trophy Tour Driven by Kia. “I always knew from a young age that I wanted to play football and I vividly remember the special moment I put on my first pair of boots. To be able to provide young refugees with boots to fulfil their passion is something I am immensely proud to be a part of, and something that I know they will remember forever.”

“Football has the power to unite and can bring children so much joy and happiness,” said UEFA President, Mr ?eferin, who has visited the Za’atari refugee camp on two occasions. “The UEFA Foundation for Children helped to provide pitches for the refugees to use, but they have been lacking boots. I am delighted that over 1,000 pairs were handed over last year and I would like to call on fans across Europe to donate their unwanted footwear to make a real difference to those living at the camp.”

* Geneva Motor Show will feature trophy display only, with no boots donation or ticket promotion activities.

** No ticket promotion will be held at the Rome location due to legal restrictions. 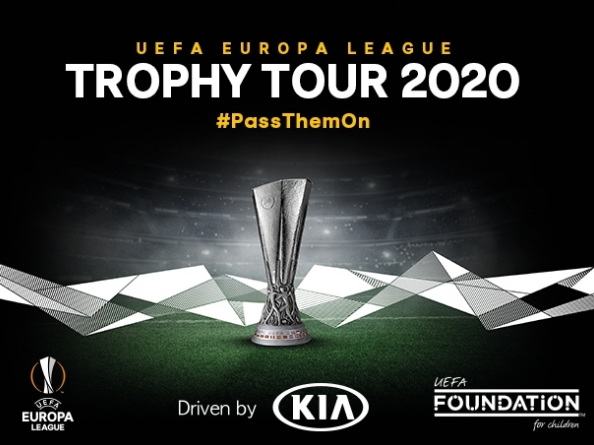